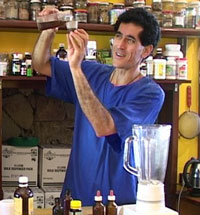 Brindle Berry : Garcinia cambogia - Hydroxycitric acid (HCA) a compound in Brindle berry , appears to block the conversion of sugars and starches into fats, that is, HCA is believed to help inhibit fat production.
HCA may suppress appetite by raising levels of certain brain chemicals such as serotonin, a key stimulator of appetite.

Green Tea : Camilia sinensis - Green tea lowers total cholesterol levels in the blood, as well as improving the ratio of good (HDL) cholesterol to bad (LDL) cholesterol. Absorbs and blocks cholesterol , and prevents the process of oxidisation creating bad cholesterol . Helps to detoxify the body can assist in weight loss

Golden Rod : Solidago virgaurea - It contains sapponins which help break down fat and are also antifungal. It is also diuretic

Gurana : Paullinia cupana - Contains caffeine which speeds up metabolism. It also suppresses appetite and has been show to lower fat cells . Research has shown guarana may affect how quickly the body perceives itself to be full. One study showed an average 11.2 pound (5.1 kilogram) weight loss in a group taking a mixture of yerba mate, guarana, and damiana, compared to an average one pound loss in a placebo group after 45 days.

Japanese Knotweed : Polygonum cuspidatum - Anti Cholesterol , also is depurative which means it helps eliminate toxins and purifies the system especially from the blood.

Meadow Sweet : Filipendula ulmaria - The flower head contains salicylic acid, from which the drug aspirin can be synthesised. Unlike the extracted aspirin, which can cause gastric ulceration at high doses, the combination of constituents in meadowsweet act to protect the inner lining of the stomach and intestines whilst still providing the anti-inflammatory benefits of aspirin . The original Genus was Spiraea , which is where the name aspirin is derived from .

Stevia : Stevia rebaudiana - Weight for weight, is 150 times sweeter than sugar , it stops the craving for sugar which is one of the causes of weight gain. Some reserach has show it to be helpful in lowering obesity.

Willow Bark : Salix alba : Contains salicylic acid, from which the drug aspirin can be synthesised. Anti - Inflammatory , analgesic .It is also diuretic .

The combination of Caffeine and Aspirin helps to burn up fat.

NB. Do not use if taking warfarin or other blood thinners.