I thought we could look at an old recipe for colds and flu’s . This consisted of Elder flowers { I would also include the berries which are rich in Vit C } Peppermint and Yarrow.

There are a number of other useful herbs ,these are Astragalus, boneset, lemon , angelica root, hyssop, mullein , wild cherry bark, Echinacea . I also have a tried and tested Cough, cold and flu syrup which I make up and sell in my clinic . The herbs we are looking at are Elder flowers and Berries , Peppermint and Yarrow. 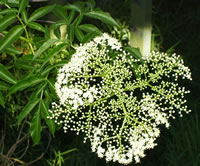 Elder - Sambucus nigra
I have an amazing Elder tree in my back yard which I planted 7 years ago . It gets covered with flowers but what is so wonderful is that it produces berries in abundance which is quite uncommon in this climate . I have had enough berries in previous years to make 6 litres of tincture and 8 jars of elder berry jam . Part of the folklore of the Elder is that it is inhabited by a spirit or witch so if you want to cut it or take any branches you have to first ask permission from the spirit . Elder berries are used to make wine and spirits while the flowers used to make a refreshing sparkling drink.

Parts used : All parts : bark , leaves , flowers , berries .
Properties : Flowers : Diaphoretic, anti-catarrhal , anti- inflammatory ,.
Berries : Diaphoretic, diuretic , laxative .
Uses : The leaves can be blended to make a good bug spray as being used to heal wounds, cuts and bruises . The flowers can be used for sinusitis , hayfever , colds and flu’s . They can also be in fused to make an eyewash or used in eye cremes along with Eyebright . If you have freckles and wish to lighten them a lotion made with elder flowers will do this . The diaphoretic qualities make it useful for sweating out colds and flu’s .
The Berries are great as a food , my son Bodhi eats them by the bunch from the tree . They are good for rheumatism and can be used like the flowers in most applications . I use the tincture in Asthma mixes for kids to add a bit more flavour . If you like making your own dyes then try Elder berries for a nice rich red dye .

Majik & Folklore : Folk names used are - Ahuren , battree,bouse tree, bour tree, eldrum, elhorn , hylder, lady elhorn , old gal , old lady , pipe tree , rob elder, sweet elder, tree of doom .
It’s gender is Feminine { obviously) , ruled by Venus , element is water and deities are Holda & Venus . It’s powers are for Healing , exorcism, protection , prosperity, sleep .
Majikal Uses : {there are many }
Wear elder to ward off attacks of any kind , or carry it to stop the temptation of adultery . Elder grown around the home brings prosperity and protects against sorcery. The wood has been used by Mages to make majik wands . If you hang elder over your doorway it keeps negativity out of your home . The berries if carried protect against negativity. I use the flowers in the ritual cup that is part of handfasting ceremonies I do . They are for blessings and luck .
There is a folklore that witches and spirits live with in the Elder Tree and that you have to ask permission of them before cutting the branches or taking the wood .I have collected many branches from my Elder tree which have been turned into wands and Staffs. Placing the sticks around the house protects from robbers and snakes . Majik flutes can be made from the branches to call forth spirits .

Peppermint - Mentha piperita
Most people know about peppermint either as a tea or have it in their gardens . It has been around for a long time and dried leaves have been found in pyramids dated at 1000 BC . The essential oil is quite popular and is very useful if used in a burner for Asthma sufferers . Peppermint has only ben popular since the 18th century . It is used to flavour liqueurs like Creme de Menthe .
Parts used : Aerial parts, Essential oil .
Properties : Analgesic , aromatic, antiseptic, anti - emetic, anti- spasmodic, carminative , diaphoretic , cholagogue,nervine .
Uses : This is a safe herb to use for morning sickness as well as travel sickness in combination with Ginger . It is particularly good for colic and indigestion as well as having a slight appetite stimulating effect .
Peppermint increases the flow of digestive juices as well as relaxing the intestinal muscles . The essential oil can be diluted in vege oil and used as a chest rub and also applied to the temple s{ avoid the eyes } to relieve headaches . In combination with other herbs it helps relieve the symptoms of Ulcerative colitis and Crohns disease . All in all a very useful herb to have growing in your gardens .

Yarrow - Achillea millefolium. From the latin name we get the association with the greek Hero Achilles . The rest of it’s Latin name describes the plant very well 1000 leaf . It has been used since ancient times as a wound healer . I have 2 varieties growing in my garden and it is very hardy and prolific. As stated at the start of this article use it in combination with the other 2 herbs for Colds and Flu’s . Yarrow sticks were used as I Ching sticks .
Parts Used : The aerial parts and the Essential oil .
Properties : Antiseptic, astringent, anti-inflammatory, antipyretic, diaphoretic, diuretic, haemostatic, hypotensive, spasmolytic, urinary antiseptic.
Uses : For anyone who is giving up smoking you can use Yarrow as a tobacco substitute . It is very good for lowering blood pressure and for toning varicose veins . If you have a urinary tract infection or cystitis , using yarrow with Buchu and Uva ursi will be of great benefit .It’s antipyretic properties are what help reduce fevers . For those of you who like making your own skin care , yarrow is good for cleansing greasy skins . Even though it is not specifically an emmenagogue , yarrow promotes menstruation so don’t use it if you are pregnant .

Majik &Folklore : Folknames - There are so many that I will only list a few here . Achilles, Arrowroot, Filed hops, Kights Milfoil, Nosebleed, Snakes Grass, Stanch Weed, Wound Wort ,Devils nettle ,Military herb, Seven years love, Yerw .Gender is Feminine , Planet is Venus , Element is Water , Powers are Courage, Love, Exorcism, Psychic Powers. Majikal Uses :Carried at a wedding or hung over the Wedding bed it ensures that Love will last at least 7 years . It is used in Love spells .Use to clear negative energies from a person , place or thing .
To prevent baldness wash your hair with Yarrow . It brings courage and protection if you wear it . It is used in incense to clear houses and objects of negativity.
Contra’ s : Large doses can cause headaches and vertigo